ah cant be bothered to think of a right title.

but plenty has happened this past week. i'm sure everyone's heard the news of the closure so i dont want to elaborate on that.
just please dont call it a merger bt the 2 free papers. its not a merger. its more like the closure of one paper - the better one.

i dont know what's going to happen to me at this pt of time. i'm hoping for the best.

i've been thinking a lot abt life, love and relationships. (i'm reading Sex and the city afterall)
all of my conversations with friends seem to be about men. why are we all so hung up on men? i am a very guilty party as i'm always moping about the disappearance of that one man. time to get over him! plenty of fish out there... er... right...??

this was an amazing weekend, something unforgettable.

it all kicked off on friday night at brewerkz at riverside point, where about 15 ex-classmates from Class 6F of Henry Park Primary School gathered, along with our form teacher Mrs Ong.

I was a little amazed at how some people hadn't changed and others were unrecognisable. But it was good to see everyone and learn that everyone was doing well in their chosen lives. There were 4 classmates who were married, one pregnant, several in the medical industry, some more in the engineering field, others in the academic field, accountants, civil servants, insurance agents and more. Mrs Ong said she was proud of how we had turned out and it was good to hear that, and also to learn that she's still at the school, but now the HOD of English.

ABout 8 of us adjourned to a hotel at scotts road for a drink at the quiet lounge where we read aloud from autograph books and chatted until 2am.

And then I was up again at 7am on Saturday to pick up the girls to go wakeboarding at Punggol Marina. I think everyone had a great time, despite the aching bodies after.

I know I did and I found myself liking wakeboarding more and more. I was more relaxed and having more fun than the last time. My body didn't ache as much as the first time so that's fantastic and neither did I get sunburnt for a change! Am looking forward to doing this somewhat regularly although weekly would bust my budget so badly.

Saturday night was spent at Suntec, sitting through 3 hours of Chinese pop music/acting/hosting at the Next Big Thing finals. I got a good laugh out of a few of the contestants and especially William Hung with his majorly idiotic comments which bordered on 'i think he/she was good' 'i liked it' only offering one criticism 'he could've sung better' which brought on plenty of Sniggers. Hearing Hung say that would be like Bush teaching a primary one kid to read.

so i had to drag my ass down to the office on Sunday avro to file my story and rewrite another story and then be reminded to write a column ASAP.

i'm having problems with writing a column, and i think it sorta boils down to inexperience. I'm not talking about inexperience in writing but not having lived life to be able to comment fully on it. It's like what a film-maker I interviewed last week told me, that film courses should never be an undergraduate/diploma course because at that age you can only teach the technical aspects, that the stories, the narrative produced by those youngsters will never be of any mettle. Simply because they have not lived life yet. I know I haven't lived my life yet. I think it's only just started this year. I do not count my previous contract job as a job. Because it was going nowhere and it had the shortest learning curve imaginable, which all too quickly plateaued.

But can I not write a column? No, because this would all seem like an excuse to anyone who hears this.


Posted by RealLifeReading at 11:18 pm 2 comments:

i was watching the trailer of Lost In Translation just now, trying to gain some inspiration for my travel story on Tokyo, which I've foolishly volunteered to write. (perhaps not foolishly, it will after all serve as a reminder, a way of preserving my visits to that metropolis).
but watching that trailer, although without sound because i just have a crappy soundcard-less PC, i realised just how i much i enjoyed the film. i caught it once in the cinemas and again on a friend's dvd as i had missed the first 20 minutes of the film.
despite having only seen it twice, i laughed at some parts of the trailer even though i couldn't hear what was going on. it put a smile on my face this afternoon. i want the dvd. i think this is one more movie i could watch over again.
i love how it was filmed, i love the relationship the two seemingly incompatible heroes have. i love how tokyo looks.i just want to go back to July, to be back in Japan. to be on holiday. and to only worry about how to maximise my time there and minimise my spending!
i need a holiday already. july seems like ages ago.
i guess Lost In Translation is a sort of symbol, a representative of my holiday in Japan. something i'm trying to cling onto, to embed deep into my memory.
i hate the way i forget things, how i can only recall some of my previous travels. i wish i could close my eyes and have all my holidays, all the good times appear in front of me. like a film reel, a home video screening in my mind.

Posted by RealLifeReading at 12:25 am 2 comments:

how can sorrow be sweet?

he's somewhere on his way to bangkok right now. to begin a journey that i would think is a little scary but also very exciting.

Posted by RealLifeReading at 5:41 pm No comments:

i got the most interesting phone call the other day.
the voice, with an american accent, was unfamiliar.
the name, Kaixi, a little more familiar.

she was my primary 6 classmate.
hadnt seen her or heard from her for 13 years.
and there she was, on the phone, asking me if i'd like to be part of a reunion of sorts she's organising.
having only met a couple of my pri-sch classmates over the past few years, i said sure.
it's supposed to happen sometime next weekend. exciting.

so when i checked my email this morning, i was pleased to see that kaixi's actions have sorta spurred on another of my classmates to contact us. he sent us an email encouraging our participation.

coincidentally, a classmate from Uni also sent out an email suggesting a reunion sometime next year in january to mark the.... er... 1000th day of our graduation or something of that sort.
i guess since uni wasn't that long ago, its not as exciting. plus, in my line of work i keep meeting ex-classmates, from PR agencies, other magazines/newspapers. just the other day at one press conference (which included lunch), there were four of us from the same year sitting at the same table of ten. 'mini class reunion' we joked.
but it would indeed be good to catch up with people and find out how they're all doing. and what they're doing.

and just for old times sake 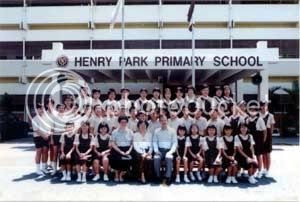 Posted by RealLifeReading at 6:15 pm No comments:

yeah so i thought i might change the template of this blog to something a little cleaner, easier on the eye. but too lazy to change the actual template so just leaving this as it is courtesy of whoever it was who put it up on blogger. thanks!

might add in some more stuff to the sidebar later tho.