This blog has been neglected for a while, and it will have to be for a while longer as I'm off to Amsterdam on Wednesday and then back next week to slog again, rewriting, editing, fact-checking my 10,000 words and bibliographies. Then when that's all handed in, the work doesn't stop as the dissertation titles need to be confirmed and approved, and an outline and proposed references laid out.

But for now, after a long day working at the university library, it is time to relax and take a breather for the sun is out, and the last of that arctic wintery week seems to be over - the sun's out, the coats are off and sunglasses on, people were lazing about on the grass on campus, cafes have dragged their chairs and tables outside. It's a lovely warm 14 deg evening. I'm just glad to be out of the library.

Meanwhile, the class had its all too occasional dinner, this time with pre-dinner drinks at The Font and then tapas at Casa Don Carlos in the Lanes.

Lighting was bad but the food was good!

The most delicious (and dramatic) dish of the day - chorizo flambed in rum.

Besides pulling out my hair while writing 10,000 words, I have been watching odd British game shows, such as The Big Fat Quiz of the Year 2006, hosted by Jimmy Carr (watch part one here). One must learn to watch the telly of the locals, after all.


Never Mind the Buzzcocks (part one) hosted by the brilliant Simon Amstell.

My (nick)name is olduvai and I am a TV addict (without a TV).
Yes it is but one of my many addictions, alas, I am easy.
Posted by RealLifeReading at 12:15 pm 2 comments:
Labels: miscellany

My plan:
To get as much reading done as possible, and then to start writing next week.
To get most of the essay out before I leave on the 28th - as in, whacking two papers out in a week (doesn't have to be 5000 words each, but at least to get the skeleton out with some flesh on it)

My neck, my back:
Pain. (Lugging the Macbook to school in a backpack that already has several books is no joke)

My head:
Full. Overflowing from every pore is everything I've been reading so far. What if it all seeps out overnight?
Posted by RealLifeReading at 2:07 pm 1 comment:
Labels: university

let's go to brighton on the weekend

My cousin came down to Brighton on Saturday, and it seemed like she took the rest of London with her as the streets were full of wanderers.

After poking around the North Laine with its always fascinating mix of shops (and people), we had a quick stop for lunch at the packed Dumb Waiter Experience.

We sat upstairs in its cheery stencilled room.

It's popular with kids.

I had a vege burger and she had a breakfast of egg, sausage, bacons, beans.

Every trip to Brighton must include the Royal Pavilion, but you've seen that already so here's more food pictures.

The window display at the Bar du Chocolat where we were part of the window entertainment for passersby as they watched us eat....

the slab of cake. One gran even knocked on the glass and played 'you eat the cake and you'll turn into a big fat slab yourself' charades with us.

The aftermath: we handled the monster quite well, I reckon. 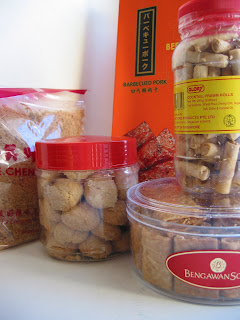 Oh and ching brought CNY goodies with her, delivered from Singapore! Bah kwa, pork floss, love letters, my mum's home made peanut cookies and oddly, prawn rolls. Thanks everyone who helped in Operation CNY Loot.
Posted by RealLifeReading at 12:09 am No comments:
Labels: brighton, food

you are what you eat

And in a world in which self-identity and place-identity are woven through webs of consumption, what we eat (and where, and why) signals, as the aphorism says, who we are. (Bell and Valentine in Consuming Geographies, 2006:3)

On my walk back from the supermarket, I was thinking about how my eating habits have changed since September. Plus one of my term papers has something to do with food and how it relates to belonging and the performance of identity.

I eat/drink less:
Meat, especially chicken, which was quite a regular dish at home.
Asian vegetables like xiaobaicai and kailan, mostly because the Chinese store sells them in really big bunches that I know will end up wilting.
Fish, which is a bit pricey and limited to salmon, trout etc. I miss pomfret! Although, I have taken to putting anchovies in pasta sauce and it really perks it up.
Milk. The milk doesn't keep as long here (which I reckon means it's fresher but that also means the tendency to waste it so I buy the smallest bottles available; however, I get my calcium from other sources - see below)
Rice. Mostly cos it takes a while to cook and i still haven't perfected boiling rice on the stove, plus I tend to cook it only if I'm making soup.
Alcohol.

I eat/drink more:
Vegetables, especially zucchinis, capsicum, eggplant, and sweet potatoes, which make excellent oven-baked fries.
Salad. All kinds of salad leaves (although I still can't stand eating watercress raw).
Yoghurt, I have discovered a fondness for Greek yoghurt - love its thick creamy texture, and it's a great dessert with raisins and honey.
Cheese. And new ones such as a blue-veined Brie, Wensleydale cheese (has a feta-like texture)
Bread - well different varieties at least. Such as Lebanese flatbread, wholewheat pita, English muffins and rye bread.
Pasta - mostly cos it's easy to cook up a big pot of sauce and keep it for the next couple of dinners. Even without sauce, it's just a quick easy dinner to throw in some garlic, zucchini, chilli, prawns and olive oil.
Tea - perfectly understandable of course. Plus there's the fact that there's only 1 or 2 places with good lattes on campus. The rest tend to offer filter coffee...bah...
Fairtrade goods - The school's very into Fairtrade products and most of the cafes sell fairtrade teas/coffees.
Posted by RealLifeReading at 2:46 am No comments:
Labels: food

3 things I hate:
Having to leave here in September
Having to go out in the rain
Separate hot and cold taps

3 things I want to do before I die:
Get married and have kids
Travel the world
Watch all my favourite bands in concert

3 things I can do:
Multitask
Make a pretty mean brownie
Say the alphabet backwards

3 things you should listen to:
Sufjan Stevens
The Flaming Lips
Your mother

3 things you should never listen to:
Death metal
Fascists
The PAP

3 things I’d like to learn:
Portuguese
How to make kongbah
To manage my money better

It is March and patches of yellow have been springing forth, brightening up the usual bus ride to school. The daffodils wave to me in the cold breeze, almost promising warmer weather to come.

Just two weeks of classes left before we break... forever. From mid-March to mid-April, I will be sweltering under the weight of two term papers, and then after that, the dissertation, due in September. But classes will officially be over soon. How odd it is to no longer have to go to school and sit in a classroom. Just one year ago, how excited (and anxious) I was to turn in my applications. And now, how much I have learnt over these seven months.

The library's full of undergrads whacking out their papers but soon it'll just be me and other postgrad students, and it will be quiet for once, all of us surrounded by books and papers and typing furiously on laptops, questions on our minds , questions being typed out, questions being answered.

And that question still remains - and then what? What's going to happen after September, I wish I could say. I wish I could put that thought out of my head but it's always there in the back, somewhere, lurking, ready to slip out of the shadows.
Posted by RealLifeReading at 11:53 am 2 comments:
Labels: miscellany
Newer Posts Older Posts Home
Subscribe to: Posts (Atom)