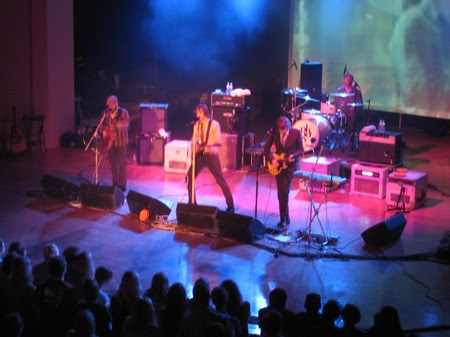 Thursday night, we caught Ok Go in concert at U of I! Yes, those 'assholes in the treadmill song' as lead singer Damian Kulash described themselves.

We really should've just turned up at 830 as opening band Living Blue sucked. Their nine too many songs all sounded the same and the sound was just really bad and distorted. I entertained myself by watching the audience downstairs as they texted other people (probably with the message 'this band sucks'). Was everyone just too polite to actually say 'you suck!' or did they actually like them? I really couldn't tell.

Finally, Ok Go came on, all snazzily dressed, in stripey shirts and suits. The best part was when they wandered off stage and appeared in the audience, doing an acoustic version of 'A Million Ways', making those in the front couple of rows sit on the stage to watch. So no, we weren't treated to the dance moves although some kids in the balcony apparently were doing them anyway.
Ok Go - A Million Ways live

And of course, they played the treadmill song, otherwise known as Here It Goes Again. The only treadmills in sight were part of the images on the screen backdrop. And many of their other songs like Invicible and one of my favourites, Oh Lately It's So Quiet (yousendit).

It was a fun but all too quick show. The band sounded great and more importantly, didn't take themselves too seriously.
Posted by RealLifeReading at 9:15 am No comments:
Labels: illinois

Yesterday it was goodbye Brighton, hello Illinois. Woke at 6, got on the National Express to Heathrow at 710, used those silly self-service kiosks to check in, only to go to another counter to check-in my bags (how is this supposed to speed things up?). I got bumped to Economy Plus (more legroom!) and made full use of it by dozing my way through the eight hours in the air (and only catching bits of Notes on a Scandal and Miss Potter, which both seemed like good shows, on the personal screen). Turbulence in the last 1.5 hours before landing made sure my migraine got worse but we finally landed in Chicago. And it was cold and dreary. R said I brought the English weather with me - the sun's been hiding and the dark clouds stewing. What a change from the many days of bright sunshine in Brighton (except for that very dreary and cold Monday).

I write this in the living room, almost having forgotten what a living room is after eight months of not having been in one. How quiet it is. No sirens (I live on one of the main streets in Brighton), and what quiet nights - no crazed drunks or screamers, no thumping bass beats from the many clubs, no squawking seagulls and unfortunately, no waves crashing on the shores (the best thing about living in Brighton is waking up to a glorious sunrise and the sound of the waves). The quiet makes this a far better place to work on the dissertation and work I must as there are books that I need to get from here that the Sussex library does not have. But of course, the main reason for being here is to be with R and today we celebrate a year of being together, although most of it has been apart. And what a year it has been!
Posted by RealLifeReading at 7:13 am 4 comments:
Labels: illinois

When I got off the train from Gatwick to Brighton, I couldn't help thinking how odd it felt to be returning from a week's vacation, back to a place I hardly call home. It's like going from one hotel to another, not really completely rooted. I don't think it's just me who feels this way, my classmates were talking about how Brighton seems to be a very transient place, where people stick around for a year or two and move off some place else. Perhaps it's because we're students. And with two universities, there are many students in this town. In a few days I'll be off to Illinois for six weeks. Two hours in a bus, another couple of hours at the airport, eight hours in the plane, three hours in the car. And I'll finally be there.

Meanwhile, Brighton Daily Photo's been doing a series of posts on the locations of Quadrophenia, which I have to admit I have never seen. That cafe's just down the road from here!

And on the bus ride back from school today, a sign on a truck owned by Sussex Scaffoldings: 'Always a satisfying erection'. I wish I had a camera.

A visit to a hairdresser saw clumps of my hair wafting to the floor. It ended up shorter than I asked for, but I quite like it.

Today, a vicious mutant seagull (they're massive in Brighton I tell you) attacks my classmate's quiche when we were having lunch out in the sun. The nice cafe people hand over another. And we glare at the bird, which stares back, hoping for another sneaky attack.

That's it from Brighton for today.
Posted by RealLifeReading at 9:11 am No comments:
Labels: brighton

Are you getting somewhere or did you get lost in amsterdam?

As always, let's start with the food. Dutch food isn't exactly world renown. It's like British food. Simple, not terribly mouth watering, it's more of a stomach filler.
Still, it's a good place to start, and after consulting my trusty library copy of the Lonely Planet, I discovered there was a little neighbourhood place just round the corner of the Hotel Hestia, which I should add is a great B&B near Vondel Park with a sweet cat named Gregory. It even has a lift for the stairphobic but it only fits two pieces of luggage and one person. 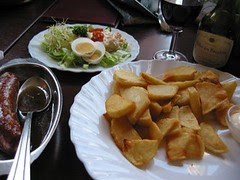 A choice of meat, potatoes and veg for under 8 euros at Hap Hmm. Not bad for a stomach filler. 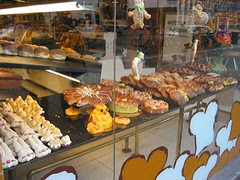 Amsterdam's got great bakeries and some really good bread. 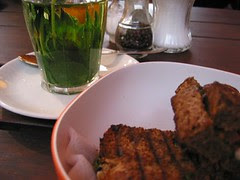 After finding our way to the De Pijp area, where the Albert Cuypmarkt (it's a flea market) is, we stopped at the Chocolate Bar for a light lunch, where I had fresh mint tea and a mozzarella toastie. 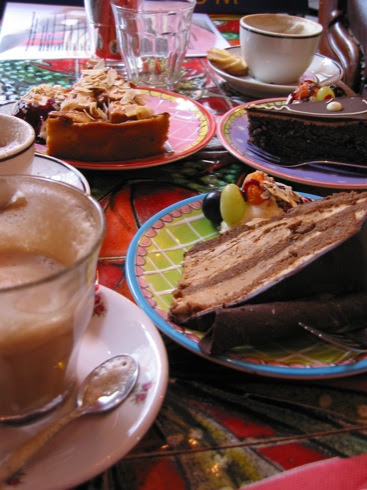 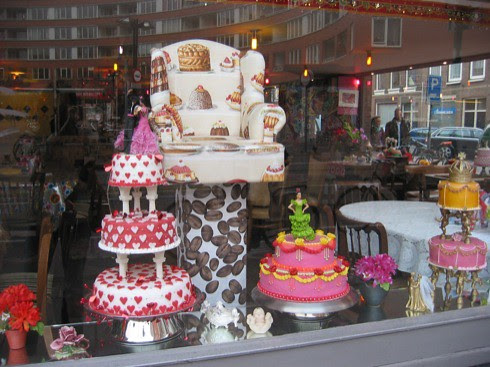 It's got an amazing window display! 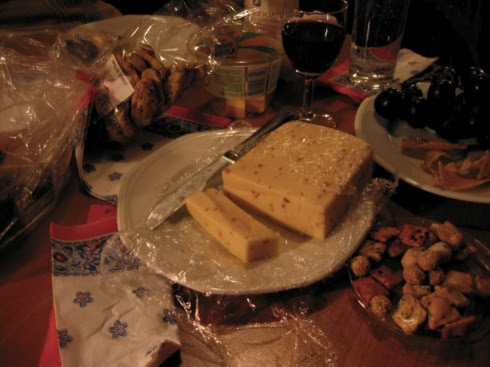 And sometimes we just had cheese and wine in the hotel room - thankfully it was large enough for three beds and a little sitting area. 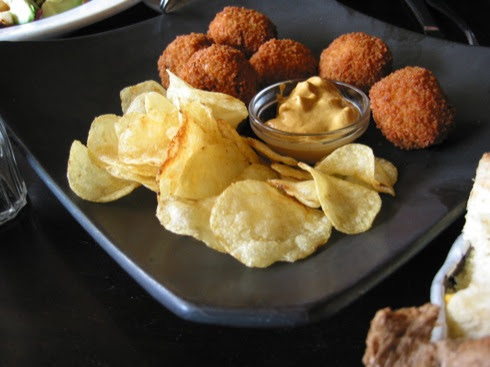 A typical snack - bitterballen. Must admit I didn't like it that much. Its got some meat and some broth and flour and rolled into a ball and coated with breadcrumbs. We ate at this in the town of Leiden, after visiting the flower show at Keukenhof. Unfortunately we were probably a couple of weeks too early as the tulips weren't out yet. 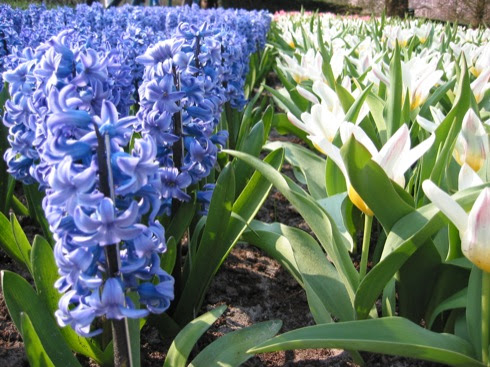 Still, it was pretty. 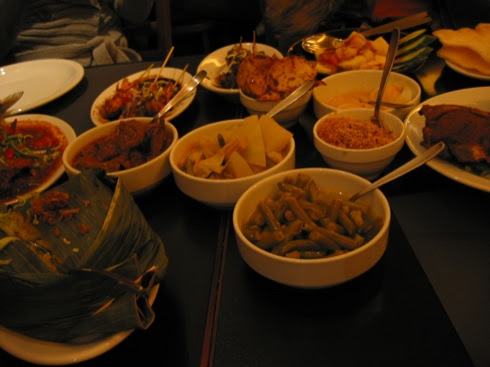 And the usual touristy thing is rijstafel or rice table. And we hit Kantjil and de Tijger in Spuistraat for that. Not too bad as it had a good variety. Of course the spiciness was toned down. 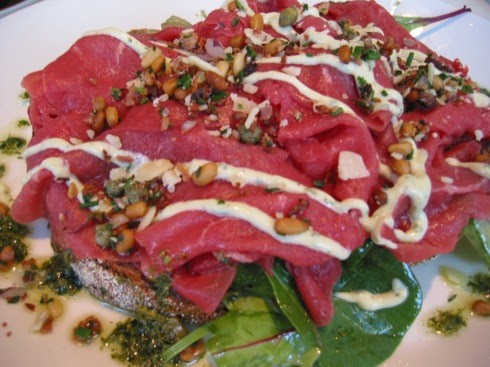 Another popular dish found at cafes - open faced sandwiches, this one is topped with carpaccio. Surprisingly a bit tasteless despite the dressing... This was at the lovely Cafe Rotterdam, in erm, Rotterdam. 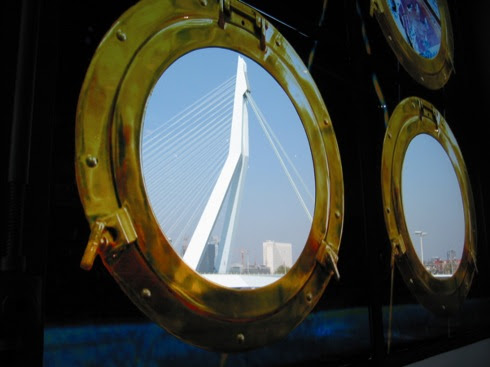 The view of the Erasmus bridge from the cafe's painted windows. 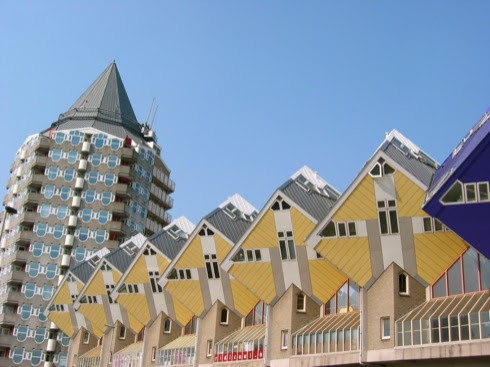 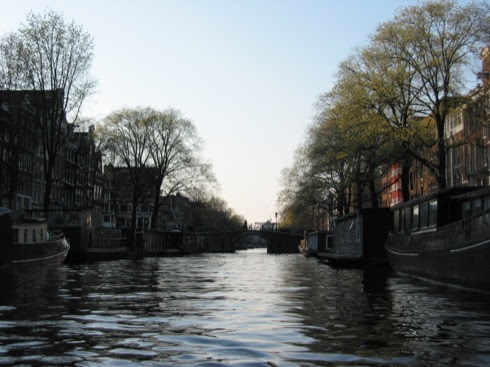 And what's a post about Amsterdam without pictures of canals? 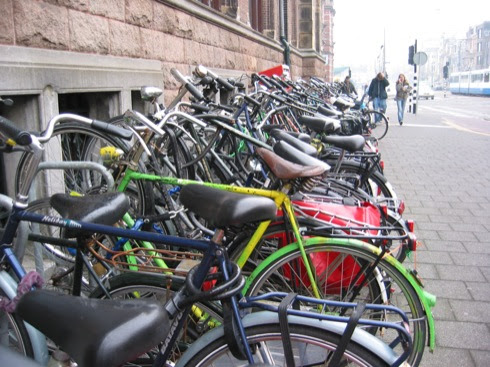 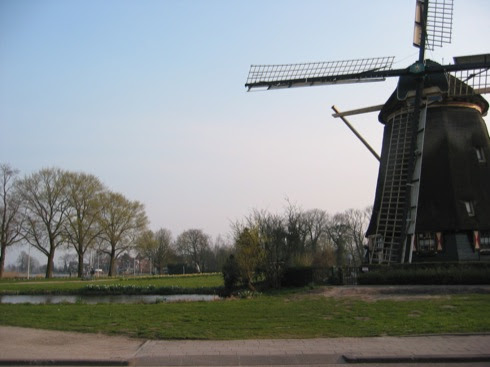 And windmills - this one's been turned into a house!

I would say it was a week well spent in Amsterdam - we hit the essentials: the Van Gogh museum, Rembrandt's house, Anne Frank's House, Albert Cuypmarkt, ate pancakes (too dark for photos), drank great Belgian beer, wandered the red light district, shopped at Dam Square, rode the tram, took a canal cruise, saw a concert at the Concert Gebouw, wandered around the Leidseplein. And even took trips out to Leiden and Rotterdam.

Posted by RealLifeReading at 1:06 am 4 comments:
Labels: travel

Yes, ladies and gentlemen, I have done it.
I have gleefully handed in my term papers. The weight is off my shoulders - at least for the next couple of days before it's time to start working on the dissertation idea to get some sort of approval before I disappear for six weeks.

This morning I turned in two 13-page papers (and three pages of bibilography, yikes!) on Friday the 13th. Unintentionally of course. I had no idea it was the 13th until I picked up a copy of the free paper someone had left on the bus. And usually I dont glance at the date, but today I did. I glanced at the date and thought, how about that for coincidence. I would like to believe that is somehow a good sign. 13 isn't always unlucky, is it? Anyway, fingers and toes crossed. Will be out of the country when the results come in so have to rely on a classmate to pick them up for me and decipher people's handwriting.

And oh, big plans for the weekend - it will be a weekend of reading. I have been sorely neglected the big bookworm in me and some of you might have noticed that the list of books on the left hand side of this blog has barely changed over the past few weeks, and indeed, I have only been reading a few pages a day. Sad, but true. And this weekend, i will change all that with a trip to the library later this afternoon to bring back a haul of books. And to accompany all that will be several DVDs from the school library including Clerks (the 10th anniversary edition!), Guess who's coming to dinner and The Children's Hour. I'm sure other people's faces will fall when they read my big plans, but hey, it's my weekend, I'll do whatever I want to do with it. Go party someplace else. 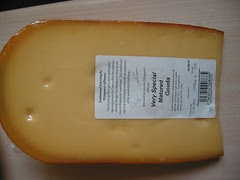 This is the truly delicious slab of cheese Yukiko and I got from Amsterdam. Gouda. Need I say more? 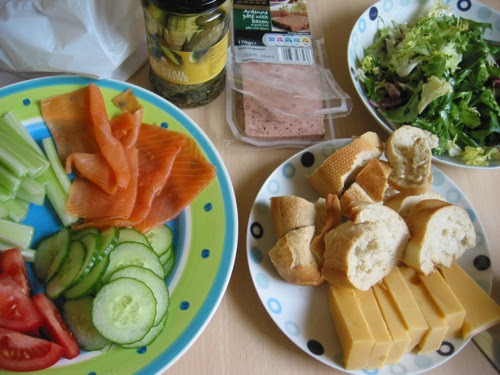 And this is the mini indoor picnic lunch we had on Easter weekend. 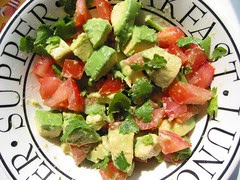 And this is the kinda food that I'll be eating from now on, cos it's spring and it's 15 deg and, (here's the best time to harp on about how the sun is out, but today, it really isn't. It's a cloudy cloudy day), the stripey deck chairs are out!
Posted by RealLifeReading at 4:00 am 2 comments:
Labels: food, university

After passing through rainbow fields on the train ride to Rotterdam, the greens and browns and greys of England just were so, well, blah. 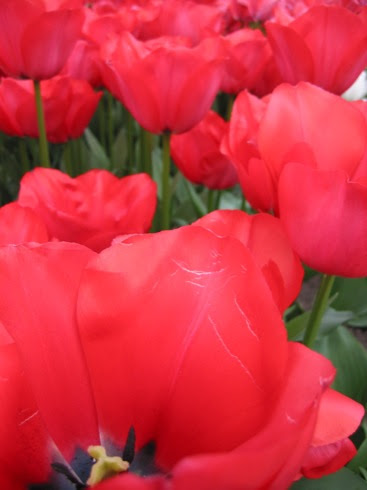 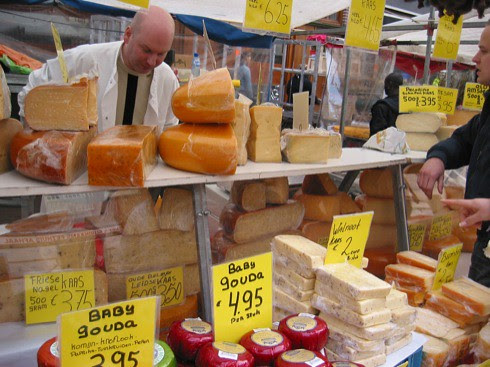 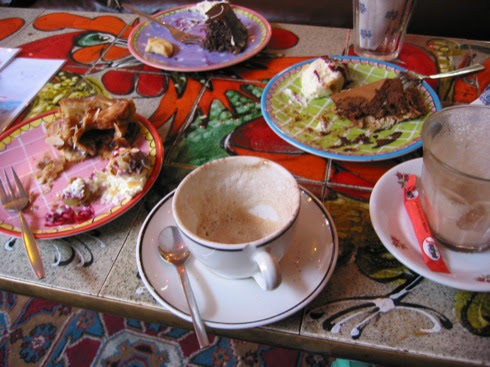 (Although first I'd have to tell you all about it - look for the next installment!)
Posted by RealLifeReading at 1:01 am 4 comments:
Labels: travel
Newer Posts Older Posts Home
Subscribe to: Posts (Atom)