With long security queues, especially with idiots in front who manage to lug along more than their fair share of bags and pack many questionable items, the need to enter the 'passengers only' section of the airport early is becoming more important. And that cuts down on the goodbye time at the airport. I already hate flying so I'm kinda queasy and uncomfortable at the thought of spending 11+ hours, and another 7+ hours on the plane. And there's the other horrible fact that I have to say goodbye to this amazing man with whom I had a measly three weeks with. I don't want to say goodbye, but I have to. We sit on those tacky plastic seats, I try not to cry, but fail miserably. San Francisco's airport, at least, has space to sit down, unlike Chicago, and is not packed, unlike Heathrow. You'd think I'd be used to all this by now, since in our nearly two-year relationship, we've had too many airport goodbyes. It never gets easier. It's always awful.
Posted by RealLifeReading at 3:10 pm 1 comment:
Labels: travel 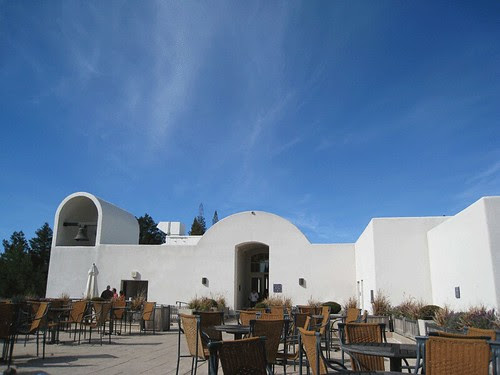 It was an almost perfect weekend - the skies were blue, the sun was out, the food and accommodations were good, if only we could just get there already. Having become quite reliant on the GPS, we allowed it to navigate us up from South San Francisco to Napa. That was fine. We popped into the Mondavi winery to pick up a bottle of Muscat, and then made a quick dash to Sterling where we had a $5 off coupon for its cable car ride/winery tour/tasting (as long as it's before 1230). 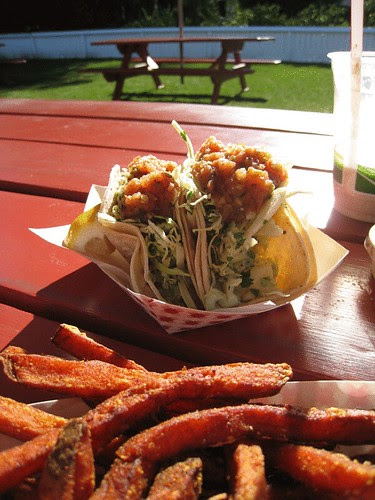 We headed back to the main Napa stretch to chow on some sweet potato fries and fish tacos and root beer float at Taylor's Automatic Refresher (that was easy enough, having driven past it on the way up). And did a quick spot of shopping at the outlets. Then on the way to the B&B in Sonoma County, we hit traffic. We crawled along, I drummed my fingers on the door, conscious of the 730 restaurant reservation, conscious also that we had to check in by 7pm. Would we ever get there? 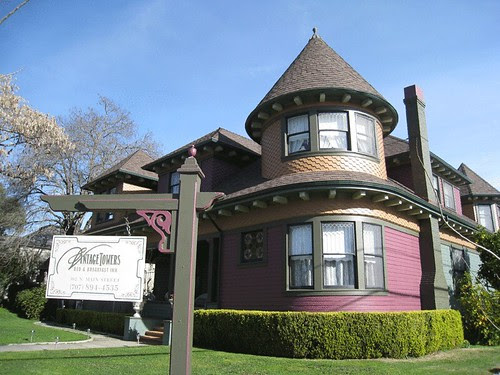 We finally did, we reached the sleepy town of Cloverdale just in time. The streetlights were on as we drove through the main street, to see, well, not much. But there was the tiny sign of Vintage Towers on the corner, and we stopped, grabbed the bags and rang the doorbell. We were taken up to Mary's Room, a quaint little pink room with a massively high bed and a tiny tiny sink in the bathroom. A fake fireplace/heater sat in the corner, with dials to turn up the fake flames and the heat. A morning room was down the corner, with great brownies and lemon-poppyseed cake for the midnight-hungry.

But we had our reservations to make (which had now been changed to 745). So off we went, only to find that the GPS would not recognise the address in the town of Windsor. A couple of calls to Odyssey sent us in a variety of directions ("school? there's no school around here", "look for the archway", "we're near the pub"). And we finally made it. Service was good, food was excellent, although the wait was quite long - there's only one man in the kitchen.

We shared the pistachio-crusted swordfish involtini, a fabulous sushi-looking starter.
R went for the lamb shank and I had the braised beef short ribs. Very tender, very rich.
And finally, they presented a complimentary apple galette, as an apology for having made us switch tables earlier. It was delicate and crisp, with just the right amount of apple slices. 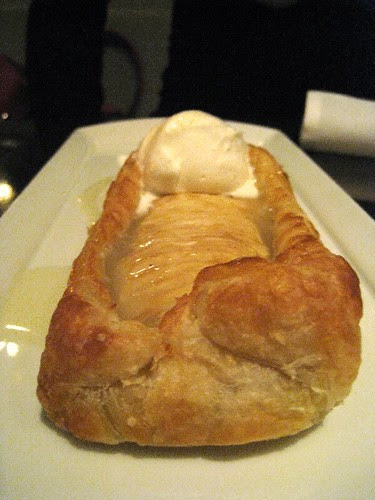 Breakfast at Vintage Towers is served family-style at 9am sharp. We sat at the long table with three other couples and a family of three, who were on a college tour of California it seemed. Family-style breakfasts with strangers can be pretty awkward but in this case, the company was very welcome as one of the guests was a sommelier in one of the hotels in the county, as well as a wine judge for the San Francisco Chronicle. He provided some pretty interesting anecdotes about Sonoma, having grown up in the area, and had good tips on where to go. Breakfast itself was amazing - starting with vanilla yoghurt with pineapples and museli, then homemade cornbread with honey butter, and a Mexican souffle served with a mango salsa and a tomato salsa. Coffee, however, was typically weak.

But there were places to go and wines to sample, so after obtaining a map of the Russian River Valley, we set off for Arista, a new boutique winery with a gorgeous Japanese garden. 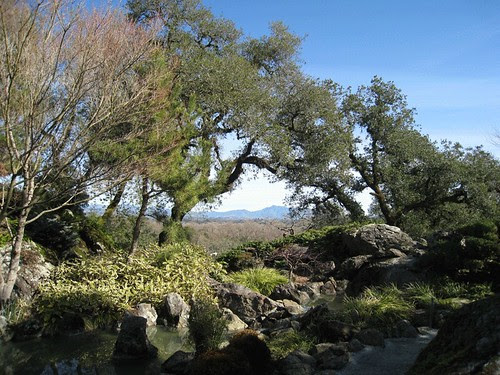 We ended up with a bottle of their velvety 2006 Longbow Pinot Noir.

Further down the road, we stopped by Moshin. This winery was nothing to look at, to be honest, but it had some very friendly staff (as did Arista), and free tastings. They also had a very drinkable Gewurtztraminer (at just $12!) and a very fine, sweet 'Moshin Potion #6', which we picked up. The lovely Scottish lady pouring the wines told us about Armstrong Redwood State Park at the nearby Guerneville and another must-see, Bodega Bay. 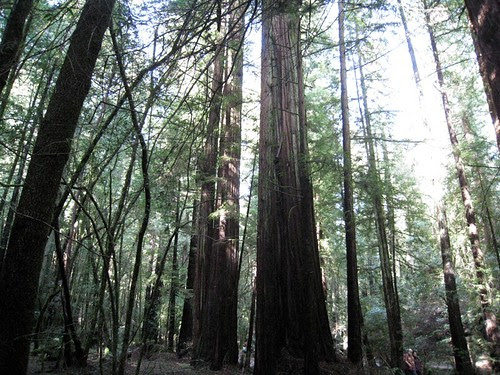 It was a chilly walk in the woods, as the sun hardly made it to ground-level, so it was a quick one. 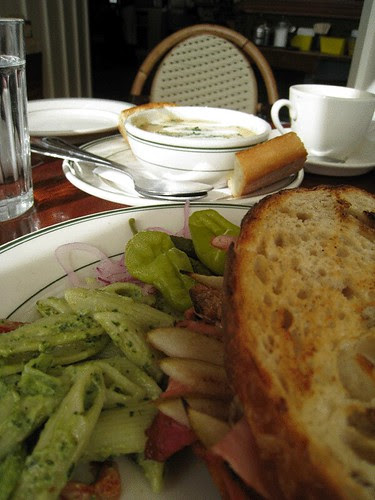 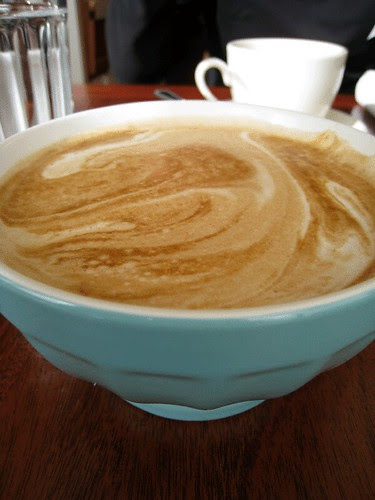 We warmed up with a yummy ham and brie sandwich, served with a pasta salad, olives and pickles, and a latte at the very sunny Willow Wood Market Cafe, although once again, the GPS failed us, not knowing where we were - luckily the town of Graton is pretty tiny, and there's no mistaking the cafe.

Our final tasting for the day was at the Martinelli Winery, but wasn't terribly impressed with any wines (or perhaps we were a bit oversaturated). And so we headed out west, to Bodega Bay, where we stumbled around some sand dunes, hearing the waves crash, but not actually being able to walk to the sea, as the damaged boardwalk was closed. 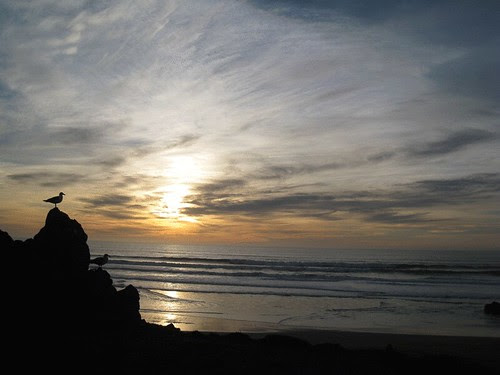 But driving north along the coast, we raced along with the setting sun and found a perfect spot to grab some pictures and have the sun dazzle us with its light show. It was getting late. It was also a Saturday, and judging by yesterday's very full restaurant (ok so it was really tiny, seating at the most 20-odd people), Sonoma was a pretty popular spot for a weekend of eating. But we had had a late lunch, which was a result of the very very big breakfast, so we were in the mood for something simple, nothing too rich like yesterday's dinner. And I remembered reading online about Bovolo, in the town of Healdsburg (about 20 minutes from the B&B), owned by the much-celebrated people from Zazu, who are all about local food, even making their own cured meats - and I was looking forward to a good piece of salami. Bovolo was an easy find - R spotted an empty lot and I looked up from the car to see the Bovolo sign, right there in front of us.

Bovolo is situated at the back of a marketplace-type store, with various little stores that sell candies, chocolates and all that. 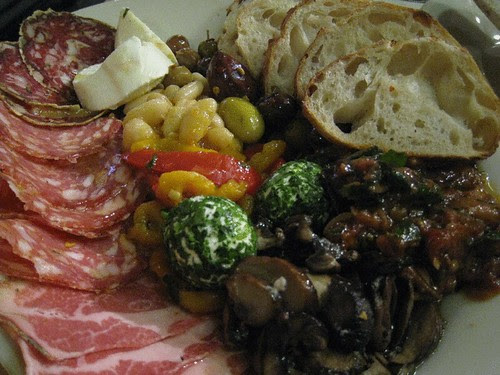 We went for the 'Butcher's' antipasti plate, which came with cheeses, grilled vegetables, and of course, that lovely meat. And the wild boar bacon mac and cheese, which was far less cheesy than I expected, with really crunchy bacon bits on top. Not bad, but not as great as the antipasti. Still it was a good meal to end the long day. 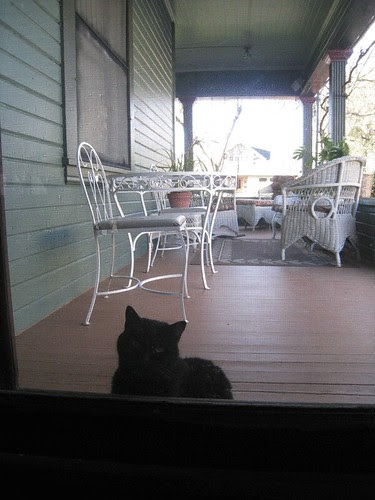 The next morning, after playing with the very friendly outdoors cat, we were greeted with a poached pear and candied ginger starter, some homemade cranberry scones and some kind of artichoke frittata, served with potato wedges, amazing as usual.

We popped by the nearby Ferrari-Carano winery for our final winery stop, as various people had commented on how beautiful the grounds are. And they were. Their wines were very drinkable, made for the mass market, as the staff mentioned. And we ended up adding another muscat and a Pinot Noir to our little haul. 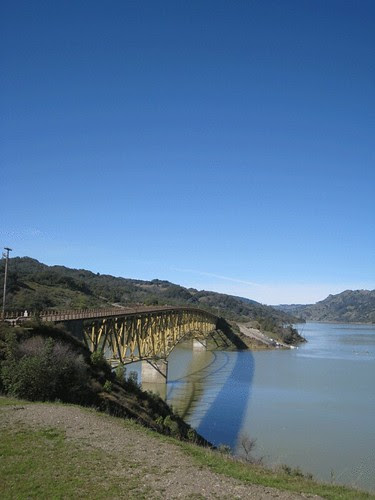 And ended off our Sonoma weekend with a drive to Lake Sonoma, relying this time on the map and directions from the B&B.
Posted by RealLifeReading at 7:56 am 1 comment:
Labels: bay area, food 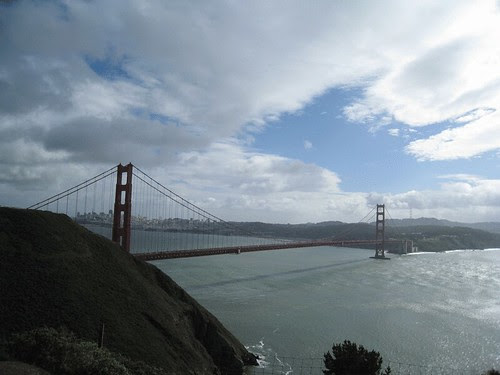 It's been an amazing first weekend in San Francisco. 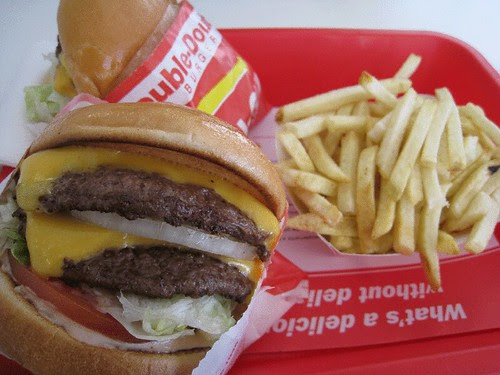 I had my first In-N-Out burger - a double-double and those awesome freshly cut fries! We finally have a fast food place we can agree on - mostly cos I don't eat fast food. But In-N-Out is about fresh fast food, so the hamburger doesn't give me that horrible plasticky feeling that the usual suspects provide. 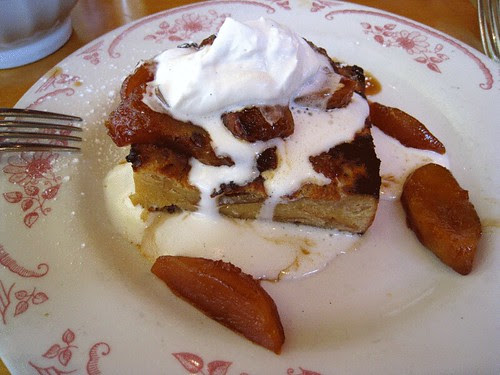 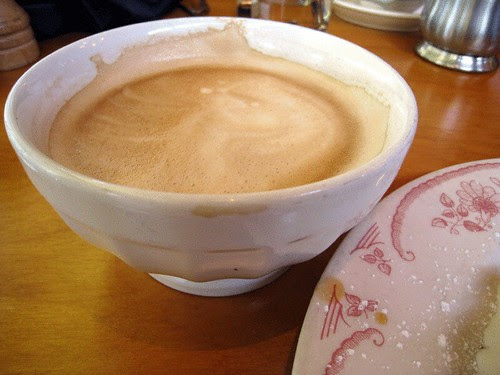 I had a lovely (although very dense) French toast with caramelised apples at the cheery Rose's Cafe on Union Street, where lattes come in bowls you cradle in your palms - perfect for a cold day. 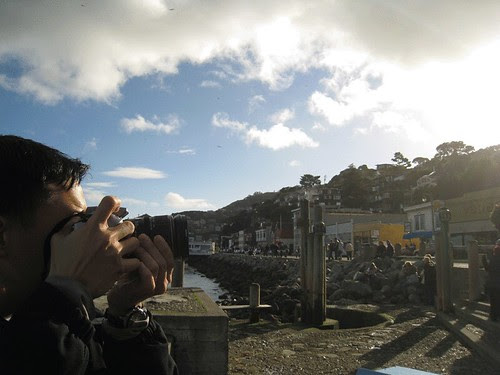 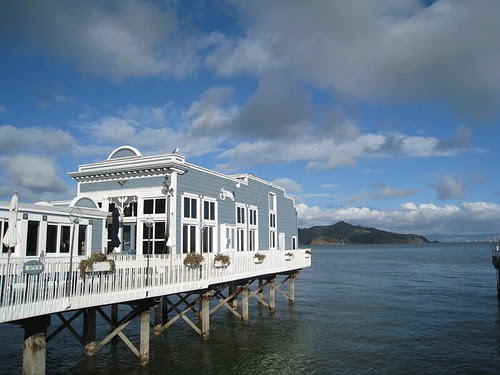 We headed north to Sausalito, where expansive views result in expensive houses (although this one's a restaurant).
Posted by RealLifeReading at 3:16 pm No comments:
Labels: bay area, travel

What a beautiful Sunday - the rain clouds had disappeared for a while, enough for us to head north across the Golden Gate Bridge for that gorgeous view. On a cliff with no one else around, he got down on his knee and pulled out the ring from his camera bag (how sneaky). Later, we caught sight of two rainbows, one after the other. I'm sure he didn't plan the sky show, but it was a sweet end to an amazing afternoon.
Posted by RealLifeReading at 8:32 am 8 comments:
Newer Posts Older Posts Home
Subscribe to: Posts (Atom)