Eating across the midwest

I've been (a bit too) well-fed here in the midwest, especially when we hit the road. 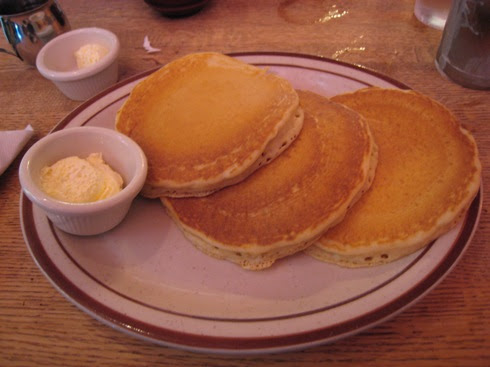 Some of the lightest, fluffiest pancakes I've ever had can be found right here in Urbana, at Courier Cafe In Green Bay, a rather dead town brought to life when footballs fans drop by their stadium, some recommendations online pointed us to Kroll's , where I chowed down on its 'broasted' chicken dinner, served with my choice of mac and cheese and a side salad. Comfort food indeed. 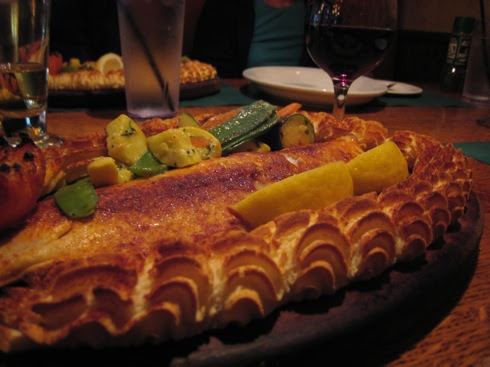 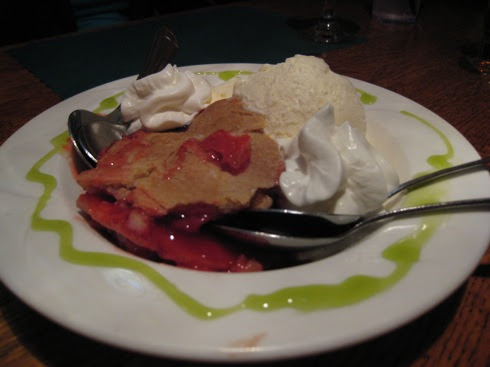 And on Mackinac Island, after recommendations by our hosts at the B&B, we tried the Village Inn for its Maple-Planked Whitefish, bordered with duchesse potatoes and its cherry cobbler. 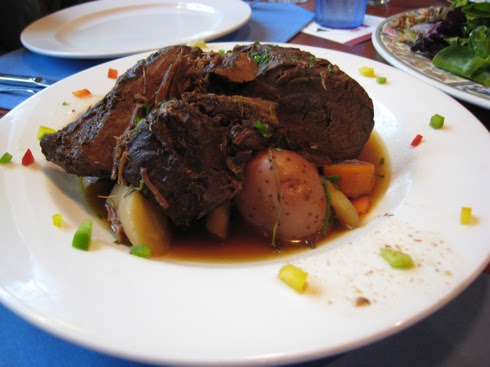 The next day, it was the Yankee Rebel Tavern for pot roast 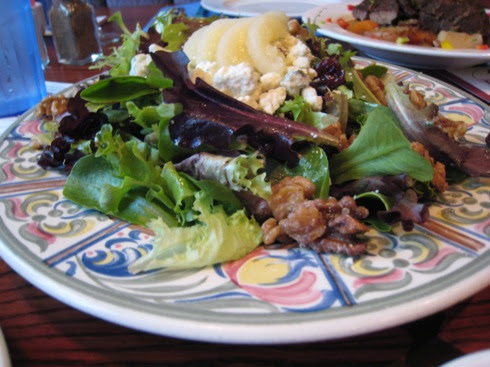 and a walnut and pear salad.

But I have to admit that some of the food I enjoyed the most on the island were the breakfast at the B&B. 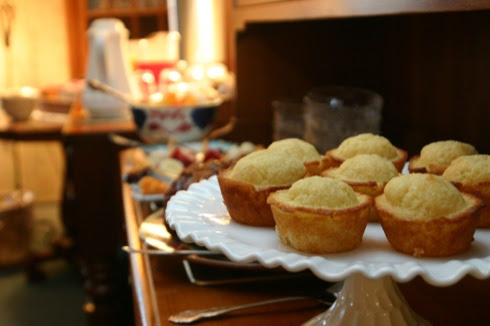 Such as the lemon muffins and coffee bundt cake we had on the first morning. The coffee was always freshly brewed and not the crappy stuff one usually gets at diners here. 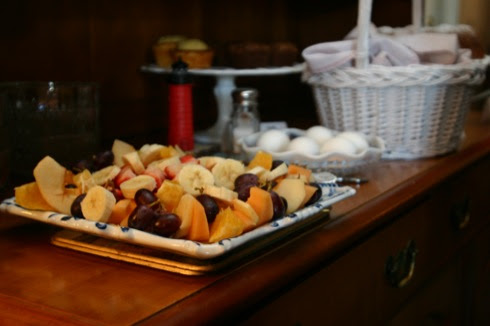 There would also be fresh fruit, cereal and bagels, and on the second morning, hardboiled eggs. And the soft chewy oatmeal raisin cookies, homemade of course. 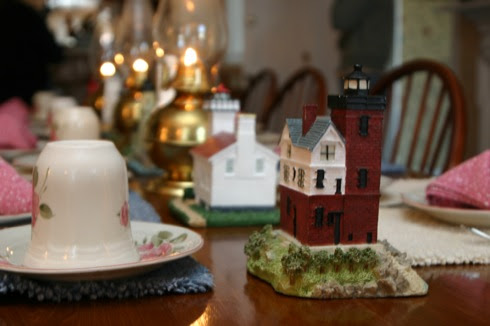 The decorations on the breakfast table changed each morning too. This was the lighthouses of Michigan display. 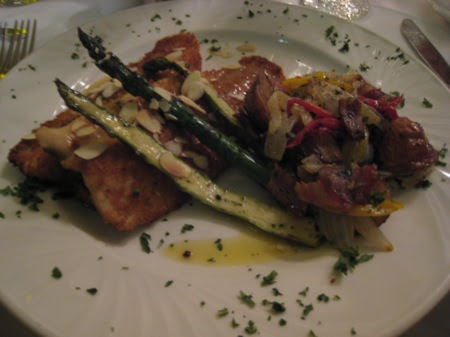 In Milwaukee, we feasted on German food, at Mader's, where I had something not exactly German... the Almond Crusted Trout served with sauteed red potato, asparagus and baby vegetables in lemon thyme sauce. It was lightly crusted and just perfectly cooked. 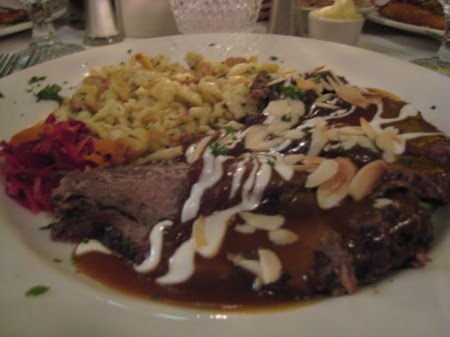 The Sauerbraten Rheinischer, which was beef marinated for ten days and oven roasted, topped with toasted almonds and golden raisins, and served with red cabbage and spaetzel (a 'German pasta', or so the waiter explained) 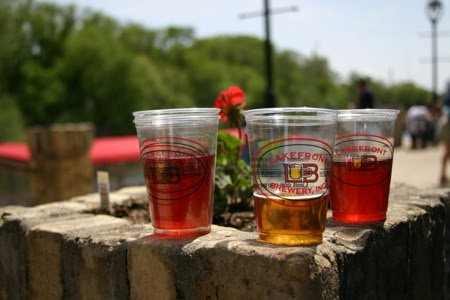 And the next day, we toured the Lakefront Brewery, recommended by the hotel staff as more 'fun' than the usual choice of Miller Brewery. Why is it more fun? And why did we stand in line for about an hour just to get in (and pay $5)? Well, to start off, it was a small brewery, its employees were all cheerily drinking beer, and unlike other brewery tours, this one actually started with a drink (or two). And another (or two) in the middle, and more at the end. Your $5 entrance fee gets you 4 tokens in exchange for your choice of beer (they had at least 7 different beers on tap) and a free souvenir glass. Not a bad deal. Especially since they had this amazing seasonal cherry beer. Oh and the guide was insightful and funny, with some jabs at Miller but as he said first off, 'we know what you're really here for'.

And after all that hearty American food, it was nice to settle down for some Korean/Japanese at this little place called Nikko, not too far from O'Hare in Chicago. 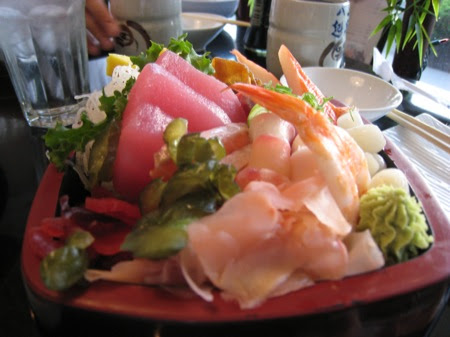 We had some good chirashi 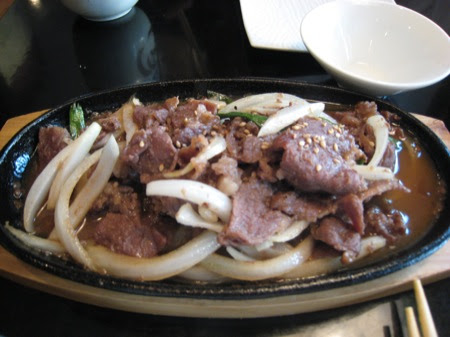 And ended the night with a quick dash into the Mitsuwa Marketplace (a Japanese supermarket) just nearby. 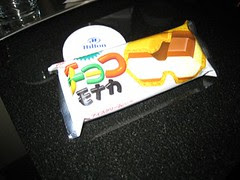 They have all kinds of Japanese stuff, from fresh produce to meat to rice crackers, but we picked up an pan for the next day's breakfast and some wafer ice-cream.

Posted by RealLifeReading at 8:18 pm No comments:
Labels: food, travel

And I'm back from the week-long roadtrip up north with R and his parents.

Here's just one highlight for now: 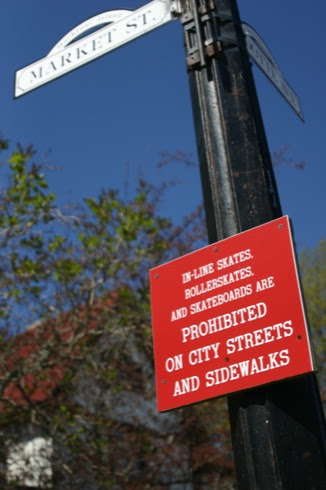 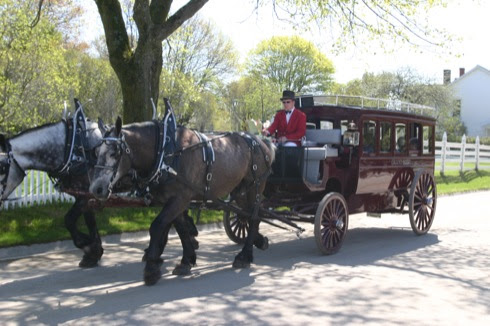 The lovely Mackinac Island, where cars are banned and people get around on horses, bicycles, on foot, and in the winter, snowmobiles. 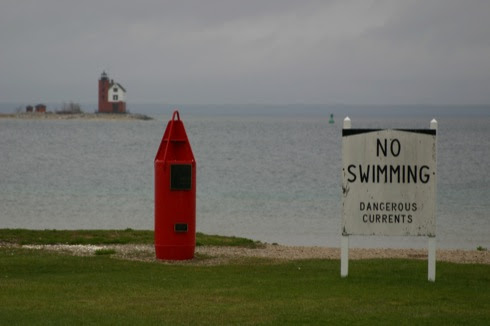 The first two days were rained out but we braved the cold and damp and took a horse carriage tour around the island. (That's the Round Island lighthouse in the background) 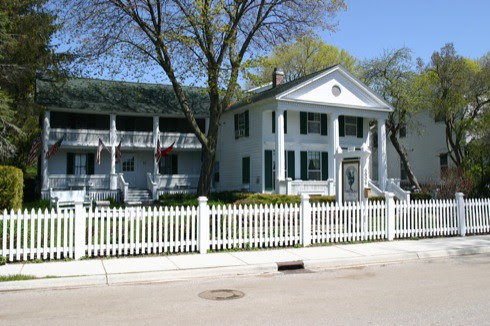 The B&B (Haan's) was a gorgeous old 1830s house and was being temporarily run by a lovely Californian couple. 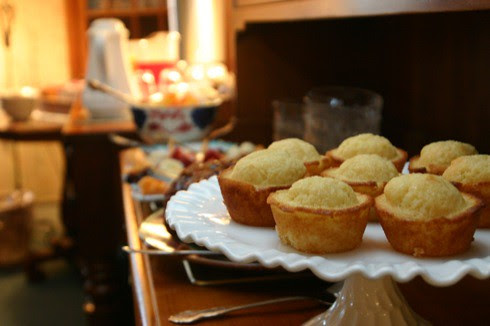 The breakfasts were just amazing, with homemade muffins and cakes and nutty coffee. And those oatmeal raisin cookies left out in the parlour at teatime! Oh so good. 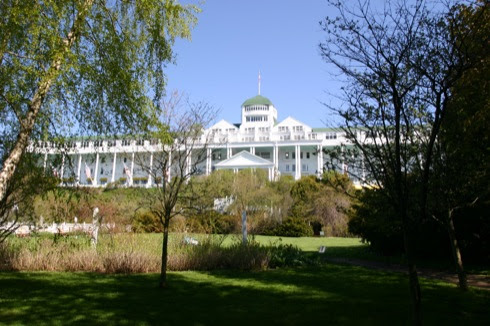 The Grand Hotel is probably a highlight for most visitors, especially those who are fans of the Christopher Reeve movie Somewhere in Time. 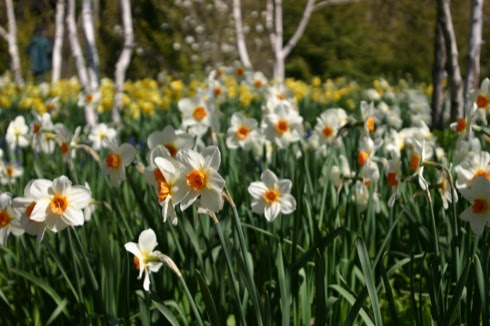 The hotel's grounds are very pretty but the hotel was closed for some women's group which had booked it, all 385 rooms.

The island's pretty damn touristy, with its main street filled with fudge shops and souvenir stores. But we were a little early in the season so we managed to miss the main tourist crush (although there were many schoolkids on field trip) and get a good deal on the room rates.
Posted by RealLifeReading at 7:00 am No comments:
Labels: travel

All this reading for the two term papers and now a dissertation had made me forget what it's like to read for fun, to read for pleasure, to read without thinking of making notes. So here in Urbana, while I've a stack of 9 books from the main university library (which has a glorious 10 floors and several half floors - very Being John Malkovich), I've managed to take some time out to do some reading:

Alain de Botton is always such a dream to read, whether he's writing about architecture or travel. He writes about such everyday things, things that most of us give nothing but a fleeting glance at. But he looks at them in a different light, and writes about these everyday occurrences in such a simple, beautiful way.

I gave up on the Delillo after about 20 pages. I see where he's going with it, but it's just not something I want to read right now - it's about a young billionaire taking a ride across town to get a haircut and various things interrupt him, such as encountering his new wife. It's supposed to be Delillo's musing about the 21st century but I didn't give him much of a chance to tell me about it.

Marjane Satrapi's work always fascinates me - she's an Iranian graphic novelist, who writes and draws about life in Iran. Her first two books (Persepolis 1 and 2) were about her childhood in Iran and studies in Austria when she was a teen. Chicken with Plums is instead about her great-uncle Nasser Ali Khan, a musician whose instrument is damaged and he can't find one to replace it. In despair, he decides to die and takes to his bed.

Elliot Perlman's an Australian writer whose book Seven Types of Ambiguity I just loved. It was a story written from seven different perspectives and just beautifully written. The Reasons I won't be Coming is a short story collection and I was far less enamored with it but there were good moments, such as the first story, a man's late night conversation with his ex.

Other stuff I read last month:
Madhur Jaffrey – Climbing the Mango Trees
(recommended by mt and definitely a fun read - it's the autobio of the famous Indian food writer)
Kurt Vonnegut – Cats Cradle
(my first Vonnegut - yes, it took me quite some time and was a result of reading about his death)
Gary Shteyngart – The Russian Debutante’s Handbook
(quirky story. Russian immigrants)
Truman Capote – The Complete Stories
(It's Capote before In Cold Blood)
Amy Tan – Saving Fish from Drowning
(not entirely sure why I picked it up as I'm not really an Amy Tan reader but it was a nice easy read while working on papers. And a bit of a departure from her Joy Luck Club kinda genre, although it has been said that she should stick to what she knows)
Posted by RealLifeReading at 7:01 am No comments:
Labels: reading
Newer Posts Older Posts Home
Subscribe to: Posts (Atom)