The Maltese Falcon by Dashiell Hammett

It was everything I expected - a detective novel, exciting, with a bit of a romance thrown into it, and yet, something I wasn't expecting, kinda funny. 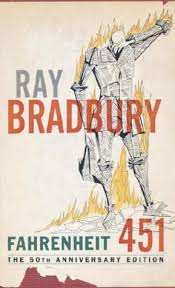 If I had known about the book burning aspect of this great novel, I'd have read it a lot sooner. A little bit hard to get into at first, and a little distressing to read (burning books!) but truly awesome. 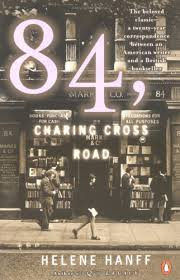 Yet another book made into a film which I have to see (Anthony Hopkins and Anne Bancroft!). This one's a collection of letters between an American scriptwriter (and booklover) and an English bookseller from 1949 to 1969. It's just such a sweet book, and I stayed up to finish it as I just couldn't put it down.
Posted by RealLifeReading at 8:37 am No comments:
Labels: reading

They walked still further and the girl said, "Is it true that long ago firemen put fires out instead of going to start them?"
"No. Houses have always been fireproof, take my word for it."
"Strange. I heard once that a long time ago houses used to burn by accident and they needed firemen to stop the flames."
He laughed.
- Ray Bradbury, Farenheit 451

Posted by RealLifeReading at 8:13 pm No comments:
Labels: reading

It's a question often asked of me, although lately the answer has been: nothing much happening. It's still early I know, as friends have warned about the stress during the run-up to it. I just want to keep it simple and sweet, and stress levels low. And hopefully it will end better than this:

(via {Furi Kuri} weddings)
Posted by RealLifeReading at 11:25 pm No comments:
Labels: wedding

always get a craving for a cup of coffee after watching Gilmore Girls?
Posted by RealLifeReading at 9:57 pm No comments:
Labels: tv

From the back of the book:

"America, in the near future, is a country of artificial experiences in cheesy shopping malls; where the machines faking dreams are always breaking down, and a company purporting to let urban racoons back into the wild is killing them, to save effort... [A] brilliant collection of short stories... you can't help loving this outstandingly tasteless and amusing volume"
Philip Hensher, Mail on Sunday

What goes on in George Saunders' head?
I cannot help but wonder as I plunge into Civilwarland in Bad Decline.

"So I dive in and drag her out. It's not very deep and the bottom's rubber-matted. None of the Basques are bright enough to switch off the Leaping Trout Subroutine however, so twice I get scraped with little fiberglass fins. Finally I get her out on the pine needles and she comes to and spits in my face and says I couldn't possibly know the darkness of her heart. Try me, I say. She crawls away and starts bashing her skull against a tree trunk. The trees are synthetic too. But still."
The Wavemaker Falters

One Amazon customer review suggested that this book have a dosage label, of one story a month. It is a short book, of 179 pages but I have to agree, breathing space is required in between stories, even though it's a library book (although one story a month is a bit much).
It's not that it's an exhausting read, instead it is funny and totally intriguing. But it can get a little repetitive. Perhaps because while the settings are somewhat different, the premise is quite similar - an average person struggling in a black-hole dystopia. And like the nun taking that leap, reading each story one at a time (with long intermissions) is like jumping off a cliff - your feet leave the safety of the rock, you freefall, your stomach seems to be making its way up to your throat and you're ready to scream when your toes, then your the rest of you hit the cushion of water below and you plunge into the comforting cool darkness. And when you shoot back up for air, you're all ready to take the dive again. Except without all the bashing of the head against the synthetic tree.

Posted by RealLifeReading at 5:17 pm No comments:
Labels: reading 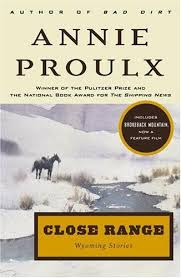 The closest I’ve come to Wyoming is well, Nevada (so says Google maps). Wyoming is a place I can hardly imagine, yet Annie Proulx’s Close Range: Wyoming Stories cut straight to the heart. I think it’s best described as Michael Knight did in a Wall Street Journal review: “Ms. Proulx writes with all the brutal beauty of one of her Wyoming snowstorms.” (via Powells). The best known of the stories is of course the romance of Ennis and Jack heartbreaking Brokeback Mountain, which was of course made into the Academy Award-winning movie. But all the other stories, of harsh, unforgiving lands, filled with lonely cowboys, despite being worlds away from what I know, are completely absorbing and affecting.

And on another continent....
It's not normally a book I would pick up, but the Picador Book of Contemporary Chinese Fiction seemed like a good introduction into well, contemporary Chinese fiction. There were even a couple of names I recognised (although hadn't read), like Su Tong (he of Raise The Red Lantern) and Wang Meng. Many of these short stories have morals behind them, such as Lin Xiu-wen's Black Walls, where a Mr Zhou is seen by his neighbours painting the walls and ceiling of his room black. The neighbours call a meeting and discuss what they should do and consider calling the police. Of course, one neighbour's young grandson pokes his head into the meeting and asks, why, if Mr Zhou is only painting his room and not everyone else's, do they kick up such a fuss? (groan). While this (and others) made me feel like I was reading a Moral Studies textbook, the collection on the whole was rather entertaining. It helped that most of the stories are pretty short and easily read while waiting for the bus. One of my favourites is Wang Meng's The Lovesick Crow and Other Fables, on the other hand, is quite a delight. The fables, such as The Comedy of Ducks, where ducks are riled after the publication of The Ugly Duckling: "Down with lakewater! Down with the farmer! Down with the turkeys! Down with the Chinese people!" they cry. The farmer, of course, solves the issue, the way a farmer will.
Posted by RealLifeReading at 2:29 am 1 comment:
Labels: reading
Newer Posts Older Posts Home
Subscribe to: Posts (Atom)